I begin by stating that I am not an economist. So I always accept the information given by economists because they all know more that I.

Yet all the talk of Triple A Ratings had me wondering.

How many other countries have these triple A thingies and where are they from?

The common story is that there are three credit rating firms, S&P, Fitches and Moodys. All American.

I did some digging and found two more. Dagong from China and JCR from Japan.

I discovered that Australia has FIVE Triple A Ratings, All Stable! This is the same as Norway and Singapore. Finland has five as well but one, Dagong’s, is on a negative watch.

So there are only two other nations with the same rating as Australia!

Of interest is that Dagong, the Chinese rating Agency has China on a AA+ rating and only Japan’s JCR rates Japan with a AAA rating.

I was so impressed that I made up a graphic, this morning, from the information I was able to gather and admit real economists may be able to do a better job.

This makes me rather proud of our Financial and Governmental institutions. 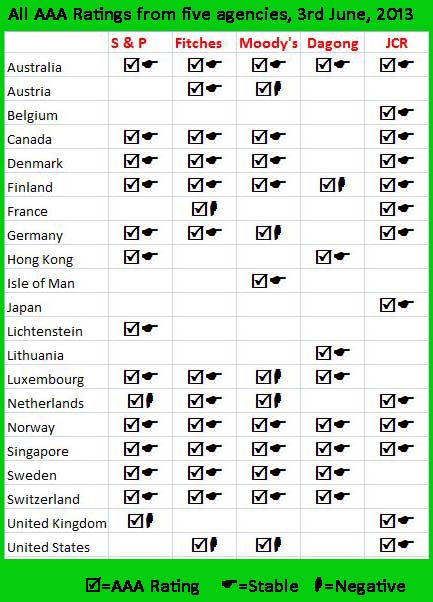 Like Loading...
This entry was posted in Australia, politics and tagged AAA Ratings, Triple A Ratings. Bookmark the permalink.