Much has been made of the fact that our current Leader of the Opposition has John Winston Howard, lately Prime Minister of this Parish, as his hero, mentor and inspiration.

We all know John Howard. Little bloke with glasses who wore a daggy track suit at every

opportunity. Spoke a lot about family values and yet seemed unaware that the policies his Government implemented forced fathers to spend more time at work and less time with their families. Appeared to want a return to the White Australia Policy with his extreme actions against “Boat People”. Demanded but failed to get adherence to a Ministerial Code of Conduct so he had to drop some 7 ministers from his Front Bench. Before the end of his second term as PM! The attrition rate was so high he had to drop the Code of Conduct! Supported Patrick’s on the waterfront to destroy the Unions. Appointed a founder of the HR Nicholl’s Society to be Treasurer of Australia. Took Australia into an illegal war.

Just where did he get his own inspiration? Who were his examples in life? If we are to believe him, it was his own family.

Yet we have seen and read very little about his family.

Oh yes, we all know his wife is Janette and he has three children. Less well known is that he was the son of Lyall and Mona Howard. Although Lyall died when John was just 16, his fatherly influence was important.

So who was the Lyall Falconer Howard who gave John Howard his Family Values?

Lyall and his father, Walter Howard, were both veterans of the First AIF in World War I. They also ran two Dulwich Hill petrol stations where John Howard worked as a boy.

Lyall Howard was an admirer of Winston Churchill and a sympathiser with and possibly a member the New Guard.

What was the New Guard? Another question with its answer hidden by the curtains of time.

The New Guard was founded in Sydney in February, 1931 by a group of concerned citizens one of whom was Col. Eric Campbell, a First World War veteran asked to act as leader.

It was opposed to communism and democracy, called for class collaboration to replace class conflict, and engaged in street fighting against opponents and in plans for a coup d’état against the Australian government. 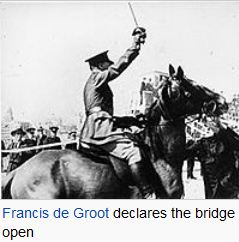 The 1930s was also the decade of the Great Depression, which caused extreme hardship around the world. Financial hardship in Australia meant that the possibility of popular uprisings did not seem then as distant and remote as it would now. The name New Guard, then, suggests not only the idea of guarding a set of values but also physically guarding the community, if necessary, against revolution. There is certainly some irony in this, given that the organisation went on to plot the forcible removal of NSW Premier Jack Lang from office. De Groot, the unauthorised cutter of the ribbon on the Sydney Harbour Bridge was a member.

Membership application forms set out the principles proclaimed by the New Guard:

They sound very like the principles espoused by Lyall’s youngest son when he became Prime Minister.

With that interesting hint about Lyall, let us dig a little deeper. 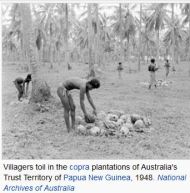 David Marr in the Sydney Morning Herald has excavated further than most.

“Howard’s father had another life. While this old soldier worked his humble Sydney service station, he was also – on paper – a New Guinea planter with a string of estates where 200 native labourers grew copra in his name. Lyall Howard had cashed in his status as a returned digger to “dummy” for the trading house W. R. Carpenter and Company Ltd. His own father, Walter, was doing it, too. The Howard case provoked secret, official investigations at the highest levels in Canberra, but they and their powerful backer got away with the scam.”

John Howard’s father AND grandfather were involved in these apparent illegalities which lasted until the 1960’s and needed the active assistance of the young solicitor Howard to unravel! As David Marr wrote, “Strangely, these plantations never seem to feature in the Prime Minister’s repertoire of stories about the ethos of his family.”

Then there are the other family connections. The connections with his older brother, Stanley.

Stanley Howard is 68, he is a partner at law firm Mallesons Stephen Jacques and a company director. The American CSC Group won a $160 million contract to provide IT services to the Commonwealth in March 1998. The contract covered a range of governmental work including the management of the national tally room’s voice and data communications on election night.

Once launched on a career, it can be hard to find the brakes. But having a younger brother who is Prime Minister can help you find the breaks!

CAPITALIST HOG OF THE WEEK: is Stan Howard. You may remember Stan from the scandal surrounding the National Textiles bankruptcy. Stan, the brother of Prime Minister John Howard, was supposed to be so financially destitute that the PM had to bail him out via the government’s entitlements package when his company went belly-up, leaving the workers owed tens of millions of dollars. It was consequently revealed that Stan and other directors helped themselves to big bonuses prior to the bankruptcy announcement. Well it seems his wife, Mrs Howard, isn’t doing too badly. Mrs Howard and her son have recently purchased the Bowral estates, Walling and Wallingwood in NSW for a whopping $6,175,000.

In his personal life, showing an affinity with his father, Stan also ignored the Law when it suited him. Those two properties were to cause more trouble.

Prime Minister John Howard’s brother Stan will be prosecuted for allegedly allowing dozens of endangered trees to be felled at his properties in the NSW southern highlands.

So we now have an insight into the Family Values so beloved of John Winston Howard.

A father who supported a coup d’état against his State Government, a grandfather and father who demonstrably crossed the legal line in their dealings with the Federal Government of the day and a brother who has similarly flexible views about legalities, niceties and ethics.

Are you, patient reader, still happy that this man and his Family Values is the hero, mentor and inspiration for our current Leader of the Opposition.