The Incompetence of Frydenberg

Slosh Tryd’nburp has announced a stuff-up in the Job Keeper program.

It seems some 3 million fewer people will be assisted than expected.

Back on 30th March when Job Keeper was unveiled, the Prime Minister (Scott Morrison) announced that, ‘He expected 6 million Australians would access a so-called JobKeeper payment for the next six months.‘  The cost was to be $130 Billion. An extra half million workers were added to that number a week or two later.

So this afternoon a hapless senior member of the ATO is wheeled out to make an explanation which will absolve Treasury and the Treasurer of responsibility. We were told that some 1000 employers (out of some 900.000 employers) made the mistake of entering 1500 instead of 1 in the box where the number of employees was to be entered. OK, innocent error replicated a thousand times. Suddenly, today, we are told that only 3.5 million people are eligible and are receiving the payment. This signals a $60 Billion saving. [The maths – 1000 x 1500 = 1.5 million. This shows an average payment of some $40,000 per invalid employee.]

All ball park reasonable. OK, in raw numbers that sort of makes mathematical sense.That number adds up to around $60 Billion. And it was not the fault of Treasury or of the ATO or of the Treasurer. The hapless ATO person said so.

It is passing strange that the shortfall, 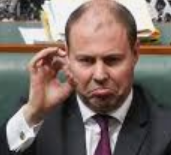 from the Government’s first number of 6.5 Million recipients, is accounted for by a simple form error. It is as if the Government, led by its Prime Minister (Scott Morrison) was psychic. In its initial calculations it included a number which exactly matched the number of erroneous applicants which were made a month later. Excepting we are being told today that the shortfall is 3 Million applicants. NOT the 1.5 Million shortfall caused by careless applicants.

It was the fault of a thousand employers who hadn’t seen the still to be created form back on 30th March. And even then they only accounted for a half of the shortfall.

Now. I happen to have here the title to a perfectly good, almost unused, suspension bridge across Sydney Harbour. How much will you offer me for it?

(There may be errors in the maths – yet I think the basic premise of this rambling question is correct. There is something whiffy about what we are being told.) 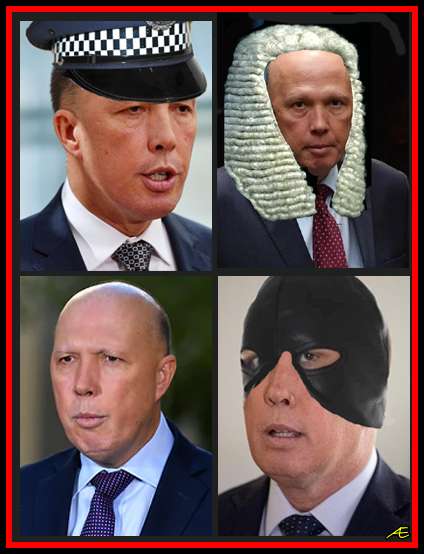 A POLLIE’S LOT IS SUCH A MONIED ONE

A POLLIE’S LOT IS SUCH A MONIED ONE

Their feelings they with difficulty smother (-culty smother)
When parliamentary duties to be done (to be done)
Ah, take one blatant corruption with another (with another)
A Pollie’s lot is such a monied one

AHHH,
When Parliamentary duties to be done, to be done
A Pollie’s lot is such a monied one.

AHHH
When Parliamentary duties to be done, to be done.
A Pollie’s lot is such a monied one. (monied one)

Peter Dutton and the 14 yo Terrorists 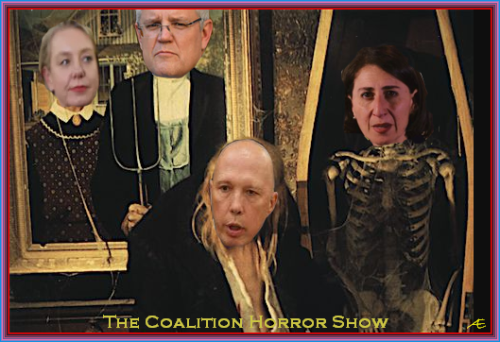 Morrison in Court – At Last! 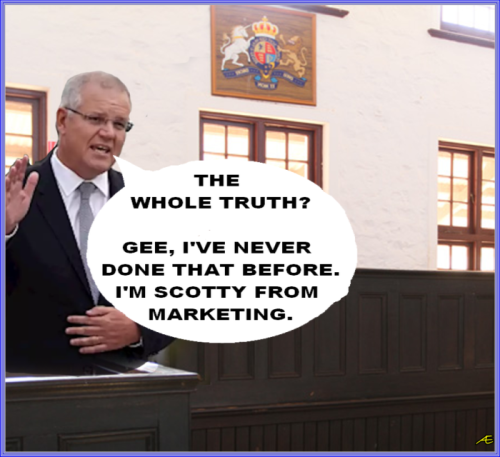 Since the 1970’s I have been against war, yet have realised that the individuals involved ‘On the ground’ are rarely there for the glory or the kudos of later generations. They were, are and will be, being used by the leaders of Nations whose aims are not those of the people killing and being killed.

Whether conscripted, forced into service by a need for some, any, employment or tempted in by the carrot of a higher education, all are indoctrinated with the myth of patriotism.

What dismays me is that we elect or allow our leaders to callously send these young people to be killed, maimed and driven insane, yet expect them to be caring and generous when it comes to caring for our sick, aged, unemployed and other members of our society.

It seems that to be a leader one needs to have no care for the people being led!

Sadly, we DO forget!