This page is the result of two things.

Firstly, my innate curiousity in family connections and histories.

Secondly, a mystery about the origins of the family of Australian Treasurer, Joe Hockey.

After a series of snippets about Joe Hockey’s grandfather had been found, I eventually found the book below. While it settles a few points, it also raises other questions. So, to begin;

An extract from “Armageddon: Two Men on an Anzac Trail” By Paul Daley 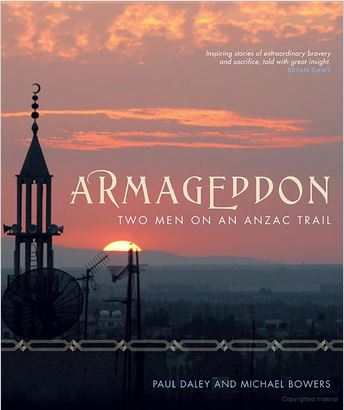 The Armenian Christian Quarter of Aleppo, known as Al-Jdeida is a reminder of the period before World War I when the Ottoman Empire – and Syria in particular – had a thriving Armenian community. The Armenian Genocide changed all that of course. However some survivors of the genocide returned long ago to this unique area north of the Old City in Aleppo, to re-establish their family homes and businesses.

Today, the focus of the Armenian Quarter is a village-style square lined with antique stores, jewellers, bars, coffee houses, a fishmonger and one of the best French restaurants in Syria. The area exudes a calm serenity that is absent in the mostly Arab sook. Old men sit around the square smoking, sipping coffee, playing cards and chatting. Kids kick Footballs around the pavement whilc young men joke and laugh, check their reflections in the shop windows. and make eyes at girls.

As soon as we enter the square, we see two or three blokes who look like a friend of ours from Australia, the senior Liberal politician ]oe Hockey. “There are Joe Hockeys everywhere.’ says Bowen. ‘This is very spooky.”

It is no surprise, perhaps, because this is when Joe’s grandfather, Joseph Hokeidonian came from. Like so many Armenian Christians, he too, ﬂed Aleppo during the genocide and ended up via a circuitous route in Jerusalem where, it is said that he was a spy for the Catholic Church.

In the British Protectorate of Palestine he turned up in Beersheba as a deputy town clerk. He later married a Palestinian Arab woman, Rose, and had two sons. But Joseph inexplicably left the marriage and one of the boys, Richard, ended up in an orphanage in Jerusalem. Joseph died mysteriously, perhaps in a car accident in Egypt some years later, while his son Richard later reunited with his mother Rose and came to Australia in the 1950’s.

Joe Hockey is Richard‘s son. . . . . . . .  When be heard we were heading to Syria, Joe asked us to ﬁnd his old family home, which was known at the turn of last century as the Hokeidoon. On teaching Aleppo, we received an email from him: ‘Good luck with the Hokeidoon. lf you ﬁnd it, please let me know if it’s worth giving up politics for. I’ll be there.‘

Our Arab guide leads us through narrow, gently winding alleyways near the square at the Forty Martyrs Armenian Church.We pass bagel shops and cloth sellers, butchers and greengrocers, and stop regularly to if anyone knows the Hokeidoon. People point and gesticulate and before long we wind our way to an enclosed market amid the great arches and high ceilings of a very old mall.  A series of narrow alleyways leads out of the main market area, including one that connects with a busy road. Above the doorway between this alleyway and the old mall, a sign with Armenian lettering reads ‘Hokeidoon‘.

The mall is surrounded by stalls that seem to specialise mainly in women‘s underwear and apparel, costume jewellery and teenage fashion. According to some of the Arabs who now run businesses here, the building was originally established as a caravanserai on the way to Mecca and was bought by Armenians in about 1900. The Armenian owners, we are told, left hurriedly during the genocide, but soon returned and lived near the Hokeidoon until 1984, when they moved to]Jerusalem. The shop owners still pay rent to an unspecified Armenian family in Jerusalem who, the Syrian authorities will be pleased to learn, have steadfastly rejected offers from Jewish investors to buy the land.

We later email joe and tell him that another, more exotic life awaits him in Aleppo. However. we advise him as follows; “The place has a certain charm, for sure, but not so certain you should give it all up for the Hokeidoon just yet.”

From another source (a Google Groups comment which does not give a source) “Mr Hockey said: “My roots lie in that part of the world. My grandfather, Joseph Hokeidonian, an Armenian, was sent by the Catholic Church in Jerusalem to go to Palestine as a spy.”
Grandfather Hokeidonian appears to have performed his duties well,  though his war service cost him an eye. After hostilities ended he became deputy town clerk of Beersheba and helped to rebuild the city. Mr Hockey’s father, Richard, was born in Bethlehem in 1927. But Joseph disappeared afterwards. He was apparently hit by a car in Egypt.

Most other sources which I have found are repetitions of words spoken by Joe Hockey.

There is still no record of Richard Hokeidonian arriving in Australia. The above extract is unclear as to whether his mother, Rose, accompanied him to Australia.

It would seem that Joseph the elder was from an old Armenian trading family which bought an already running business in Aleppo around the end of the 19th century when the Ottoman Empire still ruled. To try to put a birthdate on this man is difficult but from later events, he was probably adult when he reached fled Aleppo for Jerusalem in 1915. A child or even a teenager would not have become a spy.

His appointment as Deputy Town Clerk of Beersheba in charge of repairing the Town also indicates some maturity in age. (On a personal note, One of my Great Uncles, Col. Tom Todd led the the 10th Lt Horse in the Western Desert in WW1, took part in the Battle of Beersheba and commanded the charge into Jerusalem on Allenby’s orders. Joseph probably repaired some if the damage caused by Col Tom.)

Joseph is noted as a “spy for the Catholic Church” in Palestinian territories. It is valid to see Joseph fleeing further than Jerusalem as that was still controlled by the same Ottoman Empire which was exterminating Armenians all over the Empire. Could he have made it to Egypt? That could make his return to the Empire during WW1 as a Catholic spy feasible. It could also explain he escape in the 1930’s as a “return to a place which had been safe”.

It is probable that Joseph and Rose married in Bethlehem for that was where Richard was born in 1927. If, as seems likely, Richard was the younger, then the marriage possibly took place  around 1924/5. Richard’s older brother may have been old enough, by the time of the Arab Revolt to fend for himself and his mother while Richard spent time in the orphanage.

Joseph’s sudden disappearance from the family home, leaving a wife and two young children behind could indicate another period of personal danger. His subsequent mysterious death in Egypt could be as a result of his spying activities. In 1936 there was a major Arab uprising against the Zionists and the British. A number of people fled Palestine, some to Egypt, due to assassination threats and attempts. Joseph could have been one of these. (During the first stages of the Arab Revolt, due to rivalry between the clans of al-Husseini and Nashashibi among the Palestinian Arabs, Raghib Nashashibi was forced to flee to Egypt after several assassination attempts ordered by the radical mufti of Jerusalem, Haj Amin al-Husayni. *wikipedia*)

Richard’s older brother may have been old enough, by the time of the Arab Revolt to fend for himself and his mother while Richard spent time in the orphanage. This would explain why Richard was able to meet up with his mother (and brother?) again.

Rose could have been somewhat safer than Joseph in 1930’s Jerusalem as she was Palestinian, not Armenian.

Richard fought with the British Army during the Second World War. There is a reference somewhere about hin lying about his age which was 16 so he could join apparently aged 18. This would put his signing-up around 1943/4. By the time he was 18 he was a Warrant Officer working in Intelligence. like father, like son, although he received no injuries.

In 1948 he left (fled?) Palestine during the Arab revolt and arrived in Australia, possibly landing at Darwin.

One unexplained matter is that of the “Hockey-lookalikes” in the square in Aleppo. These people could have been Joe Hockey’s cousins through his uncle, Richard’s brother, or they could be second cousins through a Great-Grandparent who survived the genocide. Yet there seems to have been no familial interest in the Joseph/Richard Hokeidonian names being used by the tourists in the square.

So we have a timeline, roughly, for Joseph

For Richard, the putative timeline is as follows.

We still have no discovered record of his arrival in Australia