This will be an earth-shattering debate.

Especially as there will be no Carbon Tax in existence at the time of the next election.

Come to think of it, there is no Carbon Tax now!

Way back on 25th March of this year, the Australian Parliament passed;

The only time Julia Gillard has used the term “Carbon Tax” 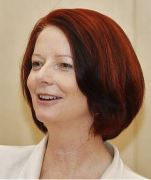 was in a 7:30 Report interview with Heather Ewart. Heather had used the “T” word four times in fairly quick succession while the Prime Minister had used the term “Price Mechanism” or “Price on Carbon” eight times.

The transcript then records this exchange;

“HEATHER EWART: With this carbon tax – you do concede it’s a carbon tax, do you not?
JULIA GILLARD: Oh, look, I’m happy to use the word tax, Heather. I understand some silly little collateral debate has broken out today. I mean, how ridiculous. This is a market-based mechanism to price carbon.“

On that single statement, more ink has been wasted and trees killed than any other issue in Australia’s recent history.

Still, all will be right with the world.

As Leader of the Opposition, Abbott has promised to bring in a replacement.

“As soon as the Carbon Tax is repealed, the Environment Minister will introduce legislation to enact the Coalition’s Direct Action Plan on climate change and carbon emissions.”

This will be such a good thing for Australia. Removing a disastrous $23 per tonne scheme and replacing it with a cheap and simple $62 per Tonne scheme.

Australia will be so much better off and will truly be the envy of a world which has mistakenly gone down the path of Carbon Prices.

And this will all happen once Tony Abbott finds a Carbon Tax to repeal.