The Sydney Morning Herald is reporting that a charity exhibition for Sydney’s Children Hospital has been cancelled because one of the featured photographs is of a six-year-old boy with no shirt on. Archibald Prizewinner Del Kathryn Barton, took the photograph of her son naked from the waist up. 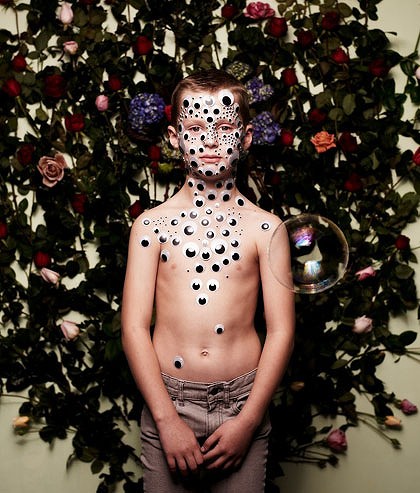 Now there is a great turn of phrase. Not “shirtless” but “Naked from the waist up!”. I wonder how close they were to using the term “Topless”.

Organiser Patrick Joyce said the image may not comply with the hospital’s strict rules on the use of images for children and that the rules would apply despite the exhibition scheduled to be shown off hospital grounds.

The collapse of the exhibition, which featured some of Australia’s top artists, is expected to cost the hospital up to $200,000.

Tamara Winikoff, the executive director of the National Association for the Visual Arts,  said that since the Bill Henson scandal, when photographs of youths and children by Bill Henson, one of Australia’s most famous artists, prompted media outrage and a police investigation, authorities were scared to associate themselves with any images of children. ”In our zeal to protect children we are erasing them entirely,” she said, “Nudity is being conflated with pornography, even though representations of nudity had been part of Australia’s artistic tradition throughout history.”

Parallels have been drawn with the Bill Henson scandal in 2008 when images of naked 12 and 13-year-old girls were used in one of his exhibitions. “In our zeal to protect children we are erasing them entirely,” Ms Winikoff said.

This censorship is the continuation of a disturbing trend in the Western World. A logical fallacy in unthinking operation.

And so art again becomes the plaything of faceless bureaucrats enforcing the rules imposed on us by the fanatical few. Once more we are being strangled by censors.