Last week was a fascinating one for Australian political wonks.

Scott Morrison’s Government suffered a historic loss on the floor of the House of Representatives.

This loss was immediately turned into a claim that it showed how weak Bill Shorten is. Despite the fact that he won.  Political analysis can be strange, especially when it is done by an opponent.

Then we saw the unedifying sight of our Prime Minister and his head of everything to do with security loudly letting any people smugglers who may want to listen know that Australia’s borders have been smashed open by this small change in the law. Not a squeak from Bill Shorten about this apparent crisis. Just Morrison and Dutton. It seemed very much like a plea from our Governmental leadership for a pre-election boatload of asylum seekers.

Please give me another Tampa, two decades on.

In contrast Bill Shorten moved on to something which directly affects several million Australians. The quality of disability care.

That was when we saw the strength of Scott Morrison’s leadership.

The Senate, through Senator Steele-John, proposed a royal commission into the recurrent scandal. The vote was passed on Thursday and the bill was due to be passed to the House of Representatives. Strangely, Scott Morrison extended Thursday’s question time for the longest time it has run ever in the history of the Nation.

Since then Scott Morrison has been rejecting suggestions that parliamentary tactics were used to avoid a disability royal commission vote.

So why the bloody hell did you extend Question Time to ridiculous lengths?

Which reminds us of another question.

Leaving a more important question to be answered

WHEN THE BLOODY HELL ARE YOU GOING TO CALL AN ELECTION SO OUR NATION CAN BE GOVERNED SENSIBLY AGAIN?

Those that do not study History

ARE CONDEMNED TO REPEAT IT! 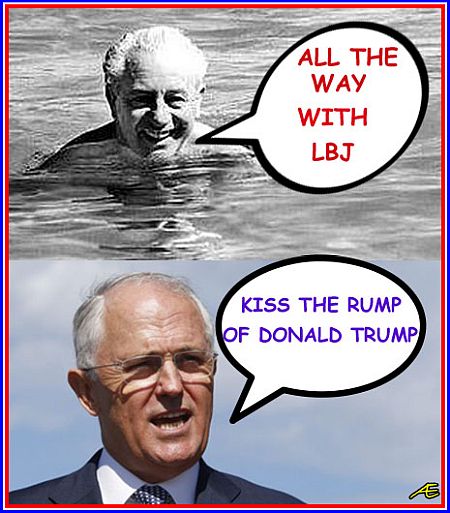 A man applying for a job at a Mildura lemon grove seemed to be far too
qualified for the job.

The manager frowned and said, “I have to ask you this; have you had any actual experience in picking lemons?”

He replied, “I have had lots of experience picking lemons. I’ve been divorced three times, I paid Bob Day a deposit to build my home, I found out my car has Takata Airbags and I voted for Malcolm Turnbull.”

As the media knives are being sharpened and Tony Abbott is pinned against a target of his own making, his deputy leader is Considering Her Position.

While Abbott swings helplessly from the petard upon which he hoist himself yesterday when he banned all LNP staffers from Tweeting and from Facebook, one of the Bishops is counting the numbers. 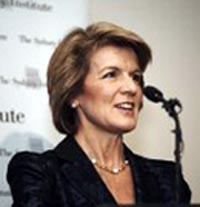 From being a mousey brown-head just a few years ago, Julie Bishop has grown tired of being just another of the Blonde Bimbos on the Opposition benches and has decided to renew her image.

Her Blonde Time has been spent as the assistant bit of fluff to three Leaders of the Opposition. To each in turn, she has pledged

the undying loyalty of a blushing bride at the altar.

Brendan Nelson, Malcolm Turnbull and, most recently,  Tony Abbott have all had the complete support of this one enduring face in the Opposition.

Now Julie has become tired of being known only as the serial deputy with the Death Stare!

With her eyes now firmly set on the top job as her current leader disintegrates under the pressure of finding yet another synonym for “NO!”, she has decided that a make-over is all that she needs to claim first prize.

After all, the Prime Minister didn’t get to where she is by being just a Blonde having fun. She is a Power Ranga, a striking redhead who is not ashamed to use her talent and  her abilities.

Redhead is the new Power Woman and Julie Bishop is letting everyone know that she means business! Combine red hair with the death stare and the Liberal Party will have an unbeatable leader!

Tony Abbott, your days are numbered!

I am severely lacking in writing inspiration today.

Australians will know what I want to write about when I mention the name “Bill Henson“.

Considered by many to be Australia’s foremost photographer, he is fascinated by twilight, the space between day and night, by adolescence, that space between child and adult. The moment of hesitancy. He has been exhibited around the world and his work is hung in some of the most prestigious galleries.

Online, some of his work is visible and much more can be seen on the net – just google the name and then click on “Images”.

Now to the the subject, the controversy. The best way to follow the developments is through a series of news items.

It began five days ago when police raided a Sydney art gallery. Within hours, the Prime Minister, Kevin Rudd weighed into the debate and the police began questioning the photographer. Betty Churcher, head of Australia’s National Art Gallery gave her opinion while some of the subjects themselves spoke out. The controversy widened to another gallery while more than 40 of Australia’s leading writers and artists supported Henson. Today the police have rejected the art world’s outcry, while two prominent politicians have supported the photographer.

In another report today, Louise Adler, the head of Melbourne University Publishing, one of 44 prominent figures who have signed an open letter urging Prime Minister Kevin Rudd to rethink his condemnation of the photos as “absolutely revolting”, calls the controversy a ‘beat-up’.

“I don’t believe that paedophiles and pornographers are going to rush to Roslyn Oxley’s gallery to find Bill Henson’s work for stimulation,” she said. “The question is, is it a private matter, one of taste or is it that the community has to come down and make a judgement?

“Do we need to be chaperoned by the state on these questions?” she asked.

I don’t believe we do. Although I know a lot of people will disagree with me.

Everyone’s comments are welcome, although I do reserve the right to adjust the wording, but not the intent of some comments, where those comments may be viewed as offensive by some readers of the archive.

So that truly informed debate can take place, the image which originally sparked this controversy is over the jump.