Occasionally he would discuss politics.  He showed a prescience in that field which I hope he did not show in his other writings.

As for the Republicans—how can one regard seriously a frightened, greedy, nostalgic huddle of tradesmen and lucky idlers who shut their eyes to history and science, steel their emotions against decent human sympathy, cling to sordid and provincial ideals exalting sheer acquisitiveness and condoning artificial hardship for the non-materially-shrewd, dwell smugly and sentimentally in a distorted dream-cosmos of outmoded phrases and principles and attitudes based on the bygone agricultural-handicraft world, and revel in (consciously or unconsciously) mendacious assumptions (such as the notion that real liberty is synonymous with the single detail of unrestricted economic license or that a rational planning of resource-distribution would contravene some vague and mystical ‘American heritage’…) utterly contrary to fact and without the slightest foundation in human experience? Intellectually, the Republican idea deserves the tolerance and respect one gives to the dead.

Six years earlier on October 4, 1930, he had written, in a letter to Robert E. Howard, – – – ‘Bunch together a group of people deliberately chosen for strong religious feelings, and you have a practical guarantee of dark morbidities expressed in crime, perversion, and insanity.’

I have not found a reference to him combining the two thoughts.

Perhaps the rest of his work is a warning of what may happen if the Republicans and the Fundamentalists joined forces.

Is Donald Trump one of the Shoggoth?

Something Stirs in R’lyeh 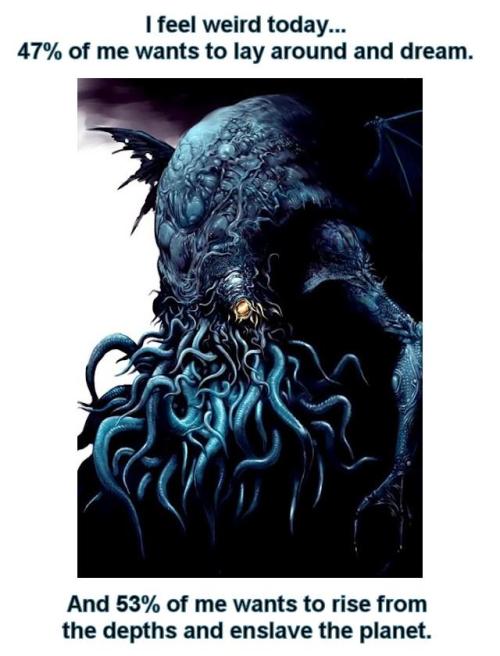 Hunter of the Dark 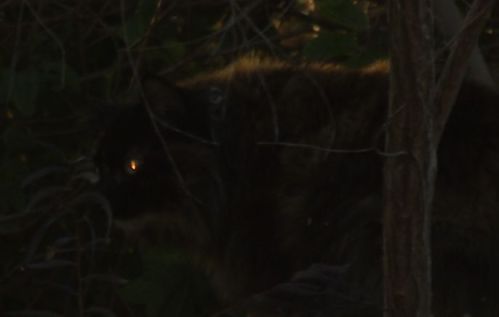 This photo was taken in the Sculpture Garden in the grounds of the National Gallery of Australia. The pond sits beside the alfresco restaurant.

Sculpted by the Indonesian Dadang Christanto in 2007, “Heads from the North” commemorates mass killings in Indonesia following an unsuccessful coup in 1966.

Yet I wonder at the source of the inspiration for this disturbing work.

H.P. Lovecraft wrote of the disturbing influences upon artists in word and form and sound.

“It was from the artists and poets that the pertinent answers came, and I know that panic would have broken loose had they been able to compare notes. A large proportion of them had dreamed very bizarre things . . . . . and some of the dreamers confessed acute fear of the gigantic nameless thing visible toward the last.”

So are these heads sinking or rising. And were the original dream heads of the acolytes of the R’lyeh faith or were they the more sinister Shoggoths of unbelievable age and rumoured myth.

All I know is that, as I ate my truffled egg and asparagus entree, there was a disturbed atmosphere around the restaurant as the mist drifted across and I felt vulnerable without the protection of walls.

From the Irregular Webcomic of David Morgan-Mar.This work is copyright and is licensed under a Creative Commons Attribution-Noncommercial-Share Alike 3.0 Unported Licence . 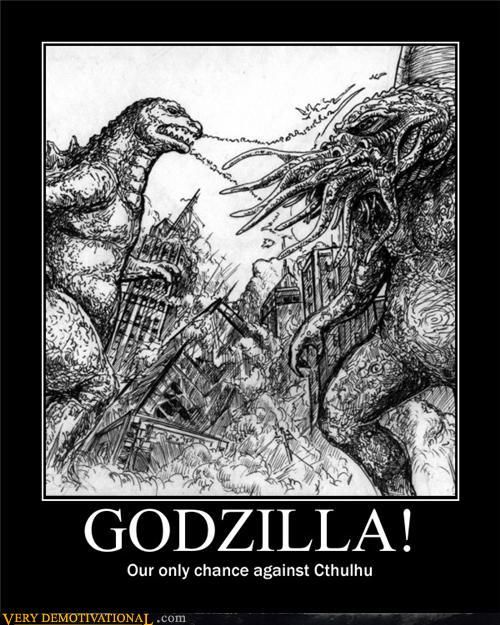 At last, the conjunction of the dark and the darker stars.

Cthulhu deals with that Bieber kid.

To the relief of eardrums everywhere.

Chihuahua Taking Over The World

The disguise is finally coming off.

Chicthulhu has now been outed!

Described by raincoaster as Chihuahuas horrible, virtually untrainable, dumb knicknacks with teeth and bad tempers we can finally see them as they really are.

From sleeping in R’lyeh they are now taking over the purses of New York and stealing souls whenever they manage to find one. Although Chicthulhu is getting hungrier. Souls are normally checked at the door in New York. 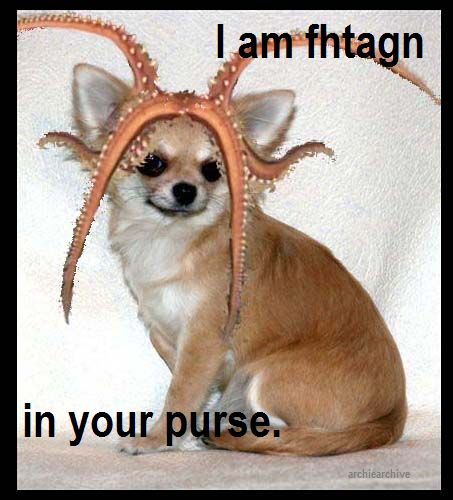 Be afraid. Be very very afraid!

At Last, The End Of Horatio! 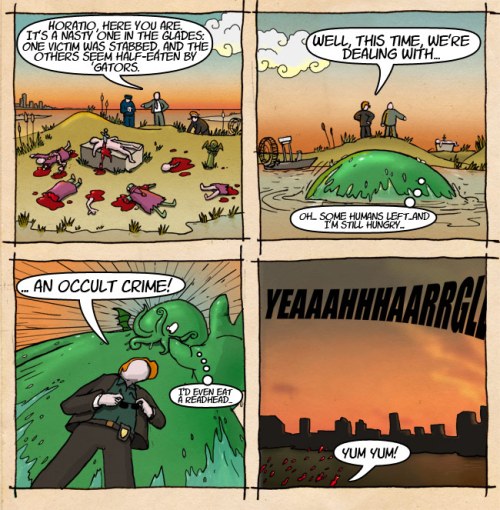 Burgled from The Unspeakable Vault of Doom

The most merciful thing in the world, I think, is the inability of the human mind to correlate all its contents. It took an email from a friend to remind me that it has been quite a while since I made mention of any unspeakable horrors or Old Ones or non-Euclidean architecture.

Cybe had been searching through the Necronomiconweb and found that, in his youth, Cthulhu had been a gym-junkie in subterranean K’n-yan. In fact he may even have been a user of certain illegal body-building substances. This could be why he was sent to the depths of R’yleh, fhtagn.

Found on the Necronomiconweb here by my mate, Cybe.

Is This An Old One?

This was so totally burgled from the artist’s site. Please save me from his wrath by visiting him and enjoying the terrors of the Unspeakable Vault (of Doom)

The Plot Out Of Time

If only old HP had this search engine to help him plot his tales of Cthulhuic horror, perhaps he would have been much more successful.

Found well away from here, from a hint on the raincoaster blog, at the artist’s blog.

Visit, if you dare, the Unspeakable Vault of Doom.