The Liberal Party and Women

The Liberal Party does not have a problem with women.

It has a problem with white, middle-aged males. 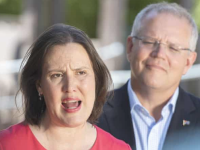 This has been politics since the time of Athens. Sadly for the Liberal Party, times have changed just a little in the past 2,500 years. Not that they have noticed. Just as they have failed to notice many other changes in society.

Kelly O’Dwyer herself told her colleagues last year that the Liberals were widely seen as “homophobic, anti-women, climate-change deniers”.

White middle-aged males have always held the power in white anglo-saxon society. They are mentored by old white males who have graduated from middle age. And the one thing they all agree on is that women do not belong in Parliament, unless it is to bring them a glass of water.

Maybe, one day, just before their extinction, the Liberal Party will suddenly wake up to what has created the success of both the ALP and the Greens. The electorate is slightly more female than male!

Perhaps this is why the current Liberal Party is so opposed to change. In a new equality-based Liberal Party, there would be no room for the dinosauric white middle-aged white males!

2 responses to “The Liberal Party and Women”