A Tale of Two Paranoias

Every now and then I leap in where angels, and sensible people, fear to tread. This is one such occasion. I am about to upset some of my best FB and Twitter friends.

Because they are being silly and contradictory! YES, fb friends and fellow tweeters, this means YOU!

Two weeks ago, with the closest election in years being counted in the seat of Herbert and with its outcome actually being important on the National stage, there were cries for cyber-voting so we could get a quick result. Forget the fact that the Government, through the AEC would need to collate e

very elector’s details onto a single database, the quick result was essential in their minds. Hackable, manipulatable and useful for deciding which electors were traitors to the cause, an internet-based electoral system was essential!

I wasn’t happy with that idea and said so. And was ignored in the heat of the argument FOR internet voting.

Now we have an Australian Census about to be conducted. For the first time it will use the internet to collect information from those who prefer the Internet to paper.  And guess what.

Many of the people who were pushing for internet voting are loudly decrying the ‘loss of privacy’ an internet-based census will lead to. Disregarding all the other databases  Government and the Multinationals have on every individual in Australia, somehow giving that same information to the Census is just plain authoritarianism.

Personally, I think that holding information for 100 years and then releasing it, as happens in Britain, is a good thing but then I sometimes wear a genealogist’s hat. When I am just a plain human being, I cannot see why there is this cognitive dissonance between a voting database being potentially misused by Government and a Census form potentially being carelessly handled by that same Government. Or not, as the case may be.

One or the other, people! If online voting is a good idea, so is an online census. Or vicky verka.

Is a little consistency here on the intertubez too much to ask for? 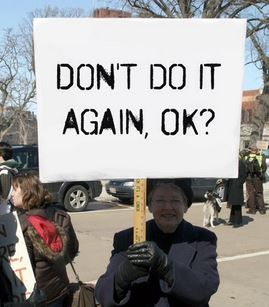 4 responses to “A Tale of Two Paranoias”