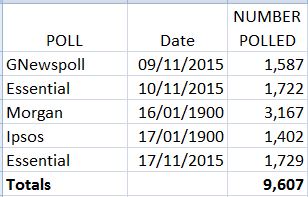 Note:- GNewspoll lumps PUP voters with “Others”. I split them out at as near to 20-80 as I can with whole numbers. That seems to be how the numbers for other polls fall.

I have noticed that KAP is now being split out by several polls. If this keeps up I’ll take them out of “Others” and give them their own column which would show between 1.5% and 2%

Translating this into electoral numbers,
assuming 15 million electors
we have a National Two Party Preferred of

A slight swing back to the left but nothing dramatic.

Once upon a time it was expected that the L-NP primary would be around 45% while the ALP could only win with a Primary beginning with a “4”.

That was back when the Greens were just beginning!

The minor parties and the “others” will have a major impact come election day. Here is how they are going.

Whenever I see a poll it is my habit to add the ALP and Green votes together.

The Left remains the Left even though it is now in two parts.
Anyway, here is what that addition of ALP + Greens looks like this week.

Things look really bad for the Opposition again but just consider this chart from Essential and look at the huge changes over the past month! (Irony button pushed)

If the Brough scandal is allowed to be published, it will have an effect. If it is given the breathless horror treatment the original Slipper case or the Craig Thompson injustice then Turnbull will have to act and sack the bully Brough.

And it could happen since I have a strong feeling a certain ex-PM is behind this sudden AFP activity.

PUBLISHED ON TUESDAY EVENING
TO BE AVAILABLE EARLY WEDNESDAY MORNING

Over to you, the discerning reader.