I was watching the ABC at 6am this morning. I like to get a good dose of aggro early on Sundays. And I certainly got it from today’s “Insiders”.

The subject was the rejection of Transfield sponsorship by the Sydney Biennale because of the connection with the concentration camps on Nauru and Manus Islands. Senator Brandis, our Minister for the Arts has taken the 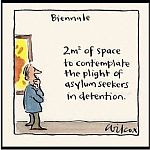 By Cathy Wicox
Used by permission

attitude that if the Arts do not want commercial sponsorship, then they obviously do not need Government sponsorship. Niki Savva suggested that if the “artists” want to “throw a tanty” they should go and do it elsewhere. I was affronted and angry.

The creative people of Australia are being sent back to the garrets. To that place where they starve and suffer and are driven to create because that is who they are.

I can see where Brandis and Savva are coming from. Everything you get, you earn. No free handouts. Patronage by the rich for those who sell out and starvation for those who remain true to their vision. All good Right Wing Conservative, big end of town ideals.

Yet Brandis, Savva and the rest of the idealogues have forgotten one very important lesson from history.

Revolutions are led by the inspiration of the starving artist. They may not be the leaders of the revolution but they create the songs, the images, the poetry of the revolution. The leaders simply use what has been created and articulate it in such a way as to energise the rest of their generation.

The last time we saw that happen in Australia was in the 1970’s.

“It’s Time” was invented by Australia’s creative people at a time when they received nothing from the Government. “It’s Time” led to Gough Whitlam becoming Prime Minister. The leaders of that campaign were the songsters, actors, artists of the day.

Later we even had a Pop Group who named themselves “The Whitlams” and they were a successful, talented group. I doubt we shall see a serious Pop Group calling themselves “The Abbotts”. Although we may see a very successful parody group with that name.

I don’t know what phrases, tunes and images our starving creative class will come up with over the next few years. I have no idea what underground movements will begin over coffee and cheap chardonny in the cold garrets of Melbourne and Hobart. In the hot, airless lofts of Sydney and Perth.

Whatever they are, I am sure Tony Abbott and his sycophantic henchmen will not be able to stand against them!

4 responses to “An Artist’s Tanty”