This list is based on what is being reported in the MSM and what I can find from a couple of specialist sites. This is to give a layman’s impression of what is going on and may say more about the MSM than the facts.

The updated, weekly figures I have collated.
This will be updated each week.

To stop this posting from becoming as large as a Tolstoy novel, in future I will drop off any daily information more than about a week old.

UPDATE 2PM WST ABC News Online is reporting a vessel intercepted by HMAS Maitland today. Number on board not available.

UPDATE 2:30PM WST The Australian reports, “An asylum boat has arrived at Christmas Island, the eighth since the election and the first since the Coalition stopped the practice of announcing boat arrivals as they occur. The boat currently at Flying Fish Cove was escorted to the Australian territory by the HMAS Maitland this afternoon. It is believed there are about 30 people onboard” The report concludes, “It has been a week since the last asylum seekers came ashore at Christmas Island. On Sunday last week, babies, young children and pregnant women were among those rescued by the HMAS Ballarat and delivered to detention on the island. There were an estimated 76 asylum seekers on that vessel, bringing the total number of asylum seekers to arrive post-election to 480 at that time. Today’s arrival of an estimated 30 people is expected to push the total past 500.

The Hazara Refugee Website reported yesterday that, “ As of Friday afternoon, sources on Christmas Island – to which asylum-seekers on intercepted boats are initially taken – were saying there had been no boats in recent days.“

I am taking steps to develop some contacts who may be able to help me in this project. I an concerned that it seems AMSA has been told not to report Asylum Seeker Vessels in distress as they have in the past. This means no assistance will be provided. Actually, I hope I have read the Herr OberMinister’s words incorrectly here. Certainly Customs have been told to cease press releases which concern Asylum Seekers.

The one source of information I think will remain open is the marinetraffic.com site. This is not an Australian site and so may be beyond the reach of our new censoring dictators. The major problem is that Australian Naval Vessels are spending a lot of time “offline” and so are invisible.

Having said that, that site is showing TWO naval Vessels (One un-named, the other the Patrol Ship HMAS Maitland) performing manoeuvres around 50Km East of Christmas Island. Neither has stopped or slowed below 5kts so it is unlikely to involve stopping Asylum Seeking vessels.

It is interesting that we hear so much about how expensive it is to rescue a yacht in difficulties to the South of Australia and yet there is no mention of the cost of ordering a couple of Naval Vessels to mooch around the Indian Ocean, travelling in ever-decreasing circles!

New Daily Cry For Help! If anyone knows of a source on Christmas Island who could help me with recording any arrivals or interceptions, please let me know about them  🙂

21st Sept; No boats reported in the MSM

There is a “cargo” vessel which has just arrived at Christmas Island. I shall keep watching. No activity has been spotted at Ashmore Reef or Cocos Island. Should anything new happen today I will update this report.

What has been reported in the MSM does not give one a lot of confidence in the new Abbott Government. The ABC has reported on Tony Burke’s frustration at not getting any information.

“The ABC asked both Customs and the Immigration Department whether any boats have arrived in recent days, but the questions were referred back to the Minister’s office. A spokesman for the Immigration Minister Scott Morrison would not say if any boats had arrived, and said further details about the Government’s Operation Sovereign Borders policy would be provided soon.“

On a different tack SBS has reported on dissatisfaction in PNG with the Manus Island agreement. This will not help in deterring people from setting out on dangerous voyages.

If you can stand the continued bile of Mike Smith, this report was posted late yesterday. Smith headlined it “Report – Indonesian Police arrest 74 illegal Middle East boat-people bound for Australia” It seems that in the Right Wing Lexicon, it is not necessary to be on a boat to be a “Boat Person”.

TRIBUNNEWS.COM, GARUT – A total of 74 illegal immigrants from the Middle East secured Garut police on Thursday (09/19/2013). Those bound for Australia via the Garut regency, was arrested in the District Leles.
Garut District Police Chief Adjunct Senior Commissioner Arif Rachman said, the immigrants came from Lebanon, Iraq, Iran, and Pakistan. They consisted of 7 children, 45 adult males and 22 adult females. . . . . . . . .Arrest immigrants, said Supian, is the result of Garut police orders to deploy patrols and raids after a vehicle transporting 12 immigrants from Myanmar were secured in District Kadungora, the day before.

SEPT 20th; Again nothing is reported in the MSM

All of my sources are silent but it early in the day and a vessel is approaching Christmas Island from the North. I am wondering if it could be another of those strange “cargo vessels” which will perform strange manouvres around the Island over the next few days. There has been no activity around Cocos Island or Ashmore Reef either. For general information, Ashmore Reef (Ashmore and Cartier Islands) is located about a quater of the way from the southern tip of Timor Island to King Sound at S12.24 E123.00.

SEPT 19th Nothing reported in the MSM

Nothing new from any of my sources. Has a curtain of silence fallen over Asylum seeker matters? Or has the Manus Island solution begun having an effect? Tony Abbott does not consider “Day One” to be the day after the election but the day he was swarn in.

SEPT 18th; Nothing reported in the MSM

And they may well be correct. There is no indication of any vessels being intercepted or recued in the past 36 hours. The Diamond Princess, allegedly a cargo vessel, was performing a number of manouvres out from Flying Fish Cove and finally, late today headed North and into invisibility.

Also of interest is this post from the Hazara Refugees Website which raises some concerns about the treatment of detainees in the detainment centres. Not only has responsibility for these places been handed to foreign private enterprise but there now appears to be no requirement for there to be any repotage of “the welfare, care, security, health and medical, counselling and education of detainees.” Am I alone in being offended by this?As a citizen of this nation I would like to know what my Government is doing in my name!

SEPT 17th; Of course there have been no reports in the MSM. MSM? Muddied Stream Media!

The Hazara Refugee Website reported last night that an asylum seeker vessel with 205 people on board was intercepted by the Royal Australian Navy after the vessel sent out a mayday call on Sunday morning. The boat was about halfway between Indonesia and Christmas Island when it sent out a call for distress at 8.11am with reports it was sinking. 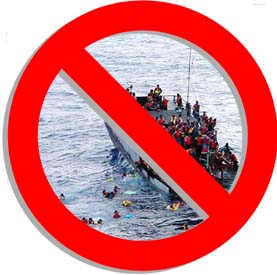 A spokesperson from the Australian Maritime Safety Authority said “Rescue Co-ordination Centre (RCC) Australia received a call for assistance from a vessel at 8.11am this morning, It issued an urgency broadcast to shipping regarding the vessel at 8.56am.” A merchant vessel responded to the broadcast, and it was due to meet the boat at 1.30pm. HMAS Parramatta, a frigate, and HMAS Pirie, a patrol boat, were also sent to meet the vessel, the Parramatta intercepting the boat at 1pm.

I do not recall seeing this emergency report on the AMSA website on Sunday morning. The alert was given at 7am WST, I was checking the site by 7:30 WST and assistance was not provided until 11am WST. Yet at no stage was anything noted on the AMSA website. I noted on Sunday 15th that there was a lot of unexplained activity around Christmas Island.

I have noticed the same this morning. One vessel disappeared while I was doing the screen shot – the MV Diamond Princess a cargo vessel registered in Thailand. The other is a cargo vessel flagged in China named the Tong Cheng 702. They have been acting just like military vessels looking for SIEV’s. It is interesting that these vessels have a habit of disappearing completely from the Live Ships chart. They don’t go anywhere. They just disappear. Then different vessels appear out of no where!

SEPT 16th; As expected, nothing reported in the MSM

Customs updated its media releases this morning with THREE new vessels. This explains the activity I have seen around Flying Fish Cove over the past 48 hours.

From Sept 13th there is an addition. ACV Triton, operating under the control of Border Protection Command intercepted a suspected irregular entry vessel south-east of Ashmore Islands today. Initial reporting suggests there are four passengers and two crew on board.

That is, by my count, NINE vessels which have arrived since Tony “I will stop the boats from day one” Abbott was elected.

SEPT 15th; Nothing reported in the MSM

The Live Ships Sites showed a lot of activity around Christmas Island overnight and this morning. I have been unable to find any reports of vessels being intercepted. I shall watch the beginning of next week with interest. Someone, somewhere will let something slip. Of course it may have just been training manouvres.

With the looming blackout from the Governement I expect my Customs’ notifications to disappear along with the AMSA emergency alerts. Mike Smith and Scott Morrison will stop reporting arrivals. It may be that discovering arrivals will stop being a real-time thing and become delayed and inaccurate guesswork. But then I am a sucker for conspiracy theories *grin*

SEPT 14th; Nothing reported in the MSM

This is unsurprising as it is not in Rupert Murdoch’s interest to let the Australian people know that Tony Abbott and Scott Morrison have already begun to fail in their new positions.

Then I spotted a tweet from a noted journalist that another Asylum seeker vessel with 25 people on board has arrived. I assume it is to do with the maddened gadflys shown on the Live Ships website which were the ships near Christmas Island last night and this morning.

That is now five vessels in eight days since “I will make a difference from Day One” Abbott was elected.

SEPT 13th; Nothing reported in the MSM

It seems Indonesia really is going to be a problem for Tony Abbott and Scott Morrison in their condescending plans to use that pesky country full of unimportant brown people as a destination for asylum seekers.

SEPT 12th; A passing radio report about a suspected asylum seeker vessel was overheard on ABC local radio yesterday while I was driving from Bunbury to Perth. I suspect it was the one reported by the Hazara’s yesterday.

SEPT 11th; Nothing reported in the MSM

I spotted a bit of movement from HMAS Glenelg and HMAS Parramatta last evening and did some checking. Amongst the mud, dirt and slime of Mike Smith’s blog of hate I found a reference to an AMSA notice I had missed. “PAN PAN FM RCC AUSTRALIA 100607Z SEP 2013 AUSSAR 2013/6118 INDIAN OCEAN NORTHERN PART CHART AUS 4071 A) REFUGEE VESSEL WITH 100 POB REQUESTING ASSISTANCE IN VICINITY 07-48.31S 105-56.51E. B) VESSELS WITHIN 10 HOURS REPORT BEST ETA”

Like Loading...
This entry was posted in Australia, politics and tagged Australian Censorship, Australian Navy, Christmas Island. Bookmark the permalink.